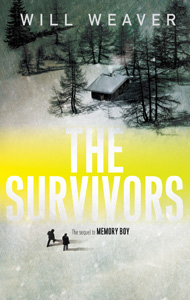 Two years ago, the ash started falling like gray snow. Major volcanoes had erupted. As sunlight grew scarce, so did food, gasoline, and law and order. For Miles and his sister, Sarah, the real disaster started when they were forced to leave their cushy, suburban home and flee to the northwoods for safety. Miles got them to a cabin, but now winter is setting in, and the cabin doesn’t have heat or electricity. Cell phones are dead. The volcanoes have changed the world. In order to survive, Sarah and Miles must change with it.

For the first time in her life, Sarah waits for a school bus. Back home in Wayzata, a west suburb of Minneapolis, her mother drove her everywhere as did all the mothers in the families she knew. Waiting to be picked up from the mall or the movie theater was annoying, but at least her mother drove a black BMW. Now standing along the dusty highway, she feels like a stupid hitch-hiker. Like a homeless person. Miles waits with her. Gun strapped over his shoulder, dusty bandana around his neck, he bends down to inspect the fine layer of ash on the highway. To Sarah, the white dust looks like thin silk draped over everything. A weird kind of shrink wrap. She wonders how the trees can breathe.

“Hasn’t been a car along here in at least two hours,” Miles says. He has yellow sawdust in the dark hair on his forearms.

“So maybe the bus won’t come,” Miles says. He glances toward the woods. “I should be out hunting, not standing around.”

Sarah checks her watch. “It will come.”

Miles pitches a stone across the ditch and into the trees. “You ever read that Jack London story about cabin fever?” he asks. “Two guys stuck in a little shack over winter in Alaska?”

Just when she gives up on Miles, he always surprises her. “No, haven’t read that one,” Sarah says.

“Anyway, they get really crazy,” he says, widening his eyes. “It’s sort of like that movie The Shining but in a cabin just like ours!”

“Stop it!” Sarah’s lower lip trembles out; she turns away so Miles won’t see her cry.

“Hey, we’ll get through this,” Miles says. “Next spring maybe we can go home. Back to the suburbs and our house.” He makes a face. “If it’s still there.”

A perfect ending is the author’s greatest challenge. Memory Boy left readers hanging. I knew I had to complete the Newell family’s story—would they survive in these new, brutal times brought on by volcanoes and climate change? That was always my goal: to take a suburban family that had everything, then gradually take everything away from them. Could they adapt and change? Could they pull together? Another aim in these novels was to use my knowledge of the outdoors—hunting and fishing and all things nature–and pass it on to younger readers. I do that mainly through old Mr. Kurz in Memory Boy, whose skill at living in the woods is passed down to Miles. But what about the rest of Miles’s family—Sarah in particular? In The Survivors she learns and grows and changes in dramatic ways. In truth, this novel is her story.