So I’m delivering serious remarks to a big crowd in a big ballroom at a Mariott Hotel in Minneapolis. It’s the Western Literature Association’s annual conference.  I’ve practiced, timed myself, and the audience is with me. I’m building up to a feel-good ending that will both summarize the speech and send the crowd off thinking about their own narratives, their own lives–when the lights go out.  The audience laughs. I curse (if I remember correctly).  They laugh louder, but are clearly as annoyed as I am.  The lights come on again–there’s a titter of relief.  I continued my remarks–but lights go off again.  Then on.  Then off.  I rush my ending, git r done, but I couldn’t be more annoyed. Afterward, the Marriott staff apologizes: it was someone (on staff) in the adjoining ballroom testing the lights. Some klutz who didn’t know that the both ball rooms, divided by large panels, were on the same light switch. I can’t tell you how pissed I was.   Later, people congratulated me on my talk, and did not seem to remember the light thing, so I sure as hell didn’t bring it up.  All of which, friends, is part of the territory of public speaking.

But enough about me.  Let’s say it’s your turn.  You’ve forked some lighting. Published a book. Written a script that got produced. You did something that some group –teachers, librarians, historians, art reviewers, journalists, bicyclists –loves, and so they invite you to come talk to them.

Ideally these invitations happen incrementally.  You build up your public speaking chops gradually. Over time. But that’s hardly ever the case. It’s more like this:  you’ve spent two years laboring on your project mostly in solitude. Just you, writing, working.  Private, dogged labor–that suddenly hits with a splash and proves that there’s a God of Hard Work. And now, suddenly, you get invitations to speak.

These will range from keynoting large conventions to appearing at interest groups in someone’s living room (book clubs are nearly always a gathering of mature women).  It’s like Ground Hog’s Day:  you come up from your hole, blinking at bright daylight, and suddenly it’s, “Please Welcome [your name here].”   You’re on.

I’ve been there, and I have a few tips that might help you when your time hits. But MIGHT is the key word here, because you have to develop your own approaches to public speaking. However, the list below include sure-fire tips on getting your public presenter chops:

Below, me doing a commencement. It was windy and about forty degrees, so I wore my Twins cap.  Why not, right?  And you–you can do public speaking too.  Be prepared. Be yourself.  Treat the opportunity as the gift it is. Good luck! 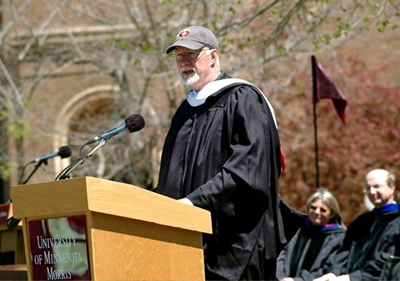